As the stay at home message came into force, we quickly realised that OOH was uniquely placed to interact with the key workers on the ground keeping us safe whilst the public remained on lockdown. We knew that OOH has a special relationship with our audience and how innovative and adaptable it can be.

With this campaign, together and overnight, we changed our industry from an advertising channel into a social channel for good – a channel to bring people’s voices out of their homes across the country with OOH. Working collaboratively with Kinetic UK and Kinetic Ireland, we contacted Media Owners across the two countries to bring this campaign to life. Their incredible, fast paced response to the pandemic meant that within one week of lockdown, the campaign had gone live.

The campaign was live for a total of eight weeks on 1292 sites – during that time we connected 1,000’s of people with 647 unique creatives on 51 formats, with over 112 million play outs with a media value of £2.5 million; making this the largest ever highly targeted multi-format campaign in the UK and Ireland. During the two months that the campaign was live, in the UK and Ireland the hashtag received 2,603,454 impressions.

At the heart of this #MyHeroes was the core purpose of highlighting the selfless people in our lives – those everyday heroes who, until the pandemic hit, were perhaps taken for granted. We wanted to put a face to the people behind the institutions – to tell their story and celebrate them as individuals by lighting up the United Kingdom and Ireland with their faces.

To do this, we handed OOH to the public and brands; giving them control. We created a highly targeted campaign for the 14.5 million key workers keeping the country running. We called for tweets, including #MyHeroes, nominating these workers with their unique stories.

As the people thanking their heroes were mostly unable to leave home to see their faces light up the screens, we married OOH to social media in a reactive and dynamic way. To ensure this happened swiftly we built a bespoke system to cope with capacity and instantly publish these timely, emotive messages.

Our CMS integrated with Twitter; once tweets were moderated and approved, 51 different formatted pieces of creative were automatically created and published. So we didn’t break lockdown, an auto generated artist’s impression of the tweet in situ automatically replied to the sender – ready for likes, shares and replies. As an industry wide campaign we were able to manipulate the location of the tweets on display; targeting the nominated heroes on screens near their home or work to make sure they knew that the whole nation was behind them.

#MyHeroes became a voice for the nation, for those who were at home OOH became their opportunity to be out of home and allowed them to show their profound gratitude for the special people in their lives. 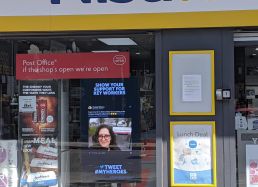 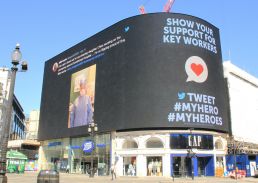